Path of Harmony: Aikido and Conflict

Aikido, a modern Japanese martial way, has its roots in the battlefield. This class will not explore the combative applications. Instead, through simple two-person exercises, we will experience the transformation of conflict into harmonized relationship. Can we experience harmony even in the midst of conflict? Let’s find out together! Class will be held outside on our farm. All will enjoy a delicious meal together from Yabai Nikkei at the end of class!

Training will be under guidance of Aki Fleshler, 6th degree black belt, 50+ years of training and instruction. We’ll train outdoors, in loose clothes. No falling down, impact, joint locks… just the fun part! In the first hour we’ll experience following, leading, absorbing, and returning. After a short break, we’ll challenge ourselves to harmonize at a short distance: using the ‘jo’ — a 4 1/2 foot staff/spear.

Lunch will be served from our wood-fired oven and grill.

Aikido, a modern Japanese martial way, has its roots in the battlefield. This class will not explore the combative applications. Instead, through simple two-person exercises, we will experience the transformation of conflict into harmonized relationship. Class will be held outside on our farm. All will enjoy a delicious meal together from Yabai Nikkei at the end of class!

About the Instructor, Aki Fleshler 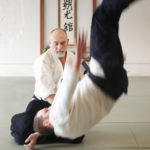 “As a long-time musician, but a beginning improviser, I was seeking a Way of dynamic interaction, where all the players have spontaneity and integrity, with full respect for the other. When I saw Aikido — that was it for me! I jumped into the deep end and never looked back. 50 years later, I see how this has transformed my life in the small and in the large. It is a privilege to share it with you — even just a small taste!”

Aki Fleshler, 6th-degree black belt and 50-year practitioner of Aikido, has taught for 30 years at his dojo (school) in Portland, and internationally for the last 15 years. He is pleased to share his dynamic approach “with beginners of all levels”. See more about instructor Aki Fleshler, Aikido and Multnomah Aikikai

About the Chef, Alex Dakers 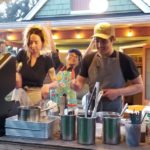 Alex Dakers began working in restaurants as a teenager in Eugene in 2008. Since, he has had notable stops at Izakaya Meiji (GM / Bar Manager) and Novo Modern Latin Table (Chef) in Eugene, as well as stints in Japan (Gaijin no Wakusei) and Peru (mo.bistro).

In 2021, he launched Yabai Nikkei as a concept inspired by the Japanese immigrant experience, his own Japanese American heritage, and his time in Japan and Peru. What began as a series of farm dinners and cooking classes has become a farm-to-table food cart at ColdFire brewing serving up nostalgic flavors with local ingredients and modern takes on Japanese American traditions.

Cancellation Policy- Any cancellation up to two weeks prior to your event date will be refunded 100%. No refunds or credits will be issued for cancellations received less than 2 weeks before your event start date, however, you may always send a friend in your place if you’re unable to attend. If a class needs to be canceled due to a natural disaster, public health crisis, or other act of nature that will prevent the class from being safely completed, then the attendee that made the booking is eligible to collect a full refund or credit for a future class at Long Table Farm. 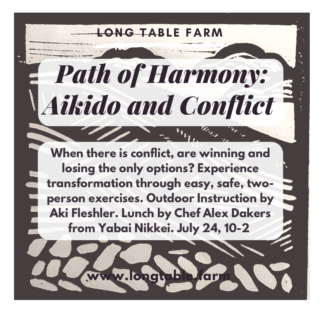 You're viewing: Path of Harmony: Aikido and Conflict $120.00
Book ticket